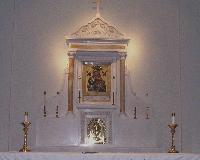 The Catholic community in Camden had its origin well before 1884. The Diocese of Charleston was founded in 1820. At that time, there were only 1,000 Catholics in all of South Carolina, North Carolina, and Georgia. These three states were included in the Diocese of Charleston. Priests were scarce, and with no church, Camden was just a small mission. Mass was celebrated in private homes only when mission priests were available and made their rounds.

In 1884 efforts were made to build a church in Camden. The building, however, was not completed and sold later at public auction. Finally, in 1903, the Sacred Heart Church was constructed and dedicated. It was used until 1914. The building still stands today on Lyttleton Street, serving as a Jewish Synagogue.

On June 18, 1909, Miss Charlotte Thompson of Baltimore, Maryland, purchased land outside of Camden and moved into a house on property known as “The Terraces.” She soon became a benefactress of the present parish in Camden. Her interest began during a visit to Rome, Italy, where she converted to Catholicism and was baptized at St. Alfonso in Rome, which houses a shrine to our Lady of Perpetual Help. In gratitude, she returned to Camden with the purpose of building a Catholic Church, on property she had purchased at the corner of Lyttleton and Pine Streets. The Church was constructed and dedicated May 24, 1914.

Today, Our Lady of Perpetual Help Parish has one of the most picturesque campuses in South Carolina. The Spanish motif lends a distinctive air to the neighborhood and the red-tiled roofs of both church and office stand out clearly. The landscaping features southern trees, flowers and shrubbery, all in keeping with the Spanish Mission design. Dark natural wood sets off the interior of the Church, and remains almost entirely original. Above the Italian white marble of the Altar is an exact replica of the painting of Our Lady of Perpetual Help, encrusted with jewels, that occupies a prominent place over the Tabernacle.     

At the time of its original dedication, the Church had only 20 regular members. Membership growth over the years has increased to approximately 675 families.

Additional buildings, erected on the parish property since the dedication of the church, include the original rectory (now the parish office) and St. Mary’s Hall. They were completed and dedicated by Bishop Paul J. Hallinan on August 20, 1961. In 1962, the garden area was enclosed and landscaped.

In 1967, enlargement of the church began and was completed in April 1968 under the pastorate of Rev. Donald Hamburger. During the construction Mass was celebrated in St Mary’s Hall. Upon completion, the Most Rev. Bishop Ernest L. Unterkœfler blessed the renovated church and classrooms on October 27, 1968. In December 2005, renovations on the altar and floor inside the church were completed.

The Our Lady of Perpetual Help icon altar, which had been in the back of the west wing, now serves as the altar for the Tabernacle and the reserved Blessed Sacrament. The original communion rail is now used as the altar of sacrifice.